What’s better than spending Saturday at rugby and having the old ball & chain hassling you about not doing housework? You guessed it. Spending Saturday and Sunday at Burr field enjoying the sunshine and squelching on your husbandly responsibilities. Sometimes life is good. Sometimes the gods smile on us.

This whole odd situation was purportedly the result of some bad weather back in December. Blizzards don’t stop flights in the North East but apparently a light dusting of frost West of the Mississippi is enough to grind the Texas rugby competition to a halt. Having played for many years in Russia’s Профессиональная регбийная лига league (look it up, it’s a thing) I don’t really buy that, but them’s the breaks in the US of A.

The Woodlands have had a tough year. A few guys they were relying on in October pulled out and went elsewhere and the result has been a group of guys without much depth to rely on. Not a happy situation for any club and certainly no better for the competition as a whole. While we all want to win rugby games, we also want to see our fellow Texas clubs in good health with good (due paying) numbers. On that note, if you’re a player and are yet to pay your dues, (expletive)-ing get to it.

The lack of depth at Woodlands did allow our guys to put out a development squad. A mix of old and new players all of whom have been pushing hard for selection this season. They certainly played like it as well. The game wasn’t the cleanest but there was a ton of passion and physicality out there. A great pre-curser for Day #2 of the Weekend of Death.

Division 2 has their fate in their own hands with respect to the post season this year. They have games in hand, depth in critical positions and plenty of gumption. Going into the game on Sunday though, the side was down the loudest guy on the field – the ‘ever approachable’ Ryan Little. Another reported victim of Field 3 which has also claimed Pena and Howard with critical injuries. Even without Little’s special brand of encouragement, the 2nd side was spectacular. A few weeks earlier, a massively understrength D2 squad had travelled to face an unbeaten HARC team in Houston. The result that day was a crushing win for our guys on the back of a dominating tight 5 performance at set piece. The squad has diversified in the last month though and now boasts impressive strength across the pitch.

In particular, the re-insertion of Gonzalo Sanchez and emergence of Skylar Talley & Justin Casino has been a thing of beauty. The three guys are intimidating and explosive in the middle of the field. Their line speed (a club focus since Steve Swindall arrived) was a huge factor in the Blacks securing a win this week. In attack, there was still a lot of mistakes, but the real progress was on D. Physicality of defense across the park is showing through with guys like Tavis Sartin really putting some mustard into their hits, Sartin also was a star on set piece stealing almost all the Reds’ second half lineout ball. In the midfield Talley and Casino are 1st grade quality defenders and Michael Spencer might be the best bench player in the competition. Congrats on a sterling performance gents. One of the best I’ve seen from you and surely a sign of things to come. 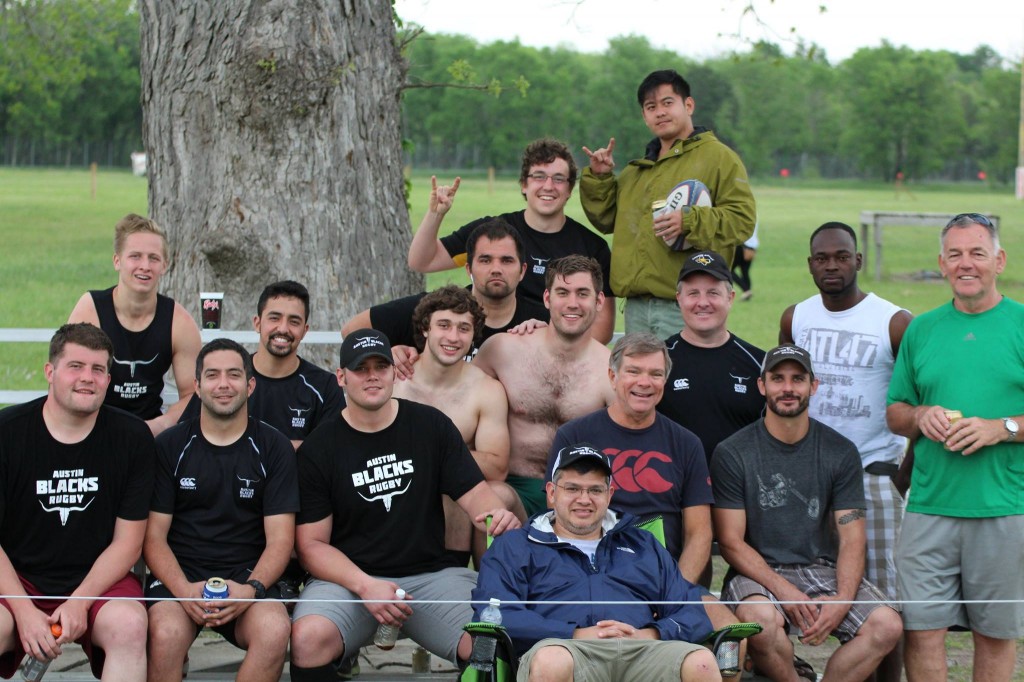 This game has been looming large since the disappointing loss our guys had to NOLA just a few weeks ago. The Reds have really come to play this season. A few of their guys have had looks at the Eagles and there’s a general professionalism coming out of Dallas that’s great for the competition as a whole. NOLA, The Reds and Austin have seemed all year like they are evenly matched and this week’s game was no exception. Yet again, there was a slew of changes in the ranks of our Austin Blacks. The team got back Jerisevich, Swindall and Malanka but (now former) Captain Tim Howard was forced to watch from the sidelines. Potentially the find of the season, Dave Pena was also out with a similar injury to Howard – the curse of Field 3 continues.

Even with those changes though, the team looked great on paper and after seeing Division 2 dispatch the Reds in spectacular fashion, all was in readiness for a big performance. The guys came out firing. An early lead secured through an beautifully worked try was a good omen. Seth Saunders seems to inject himself at the perfect moment everywhere on the field. He followed up a great run in the centers with a Carlos Spencer-like pass to put Candice Comerford over in the corner. A quick series of penalties had the guys out by a respectable margin at half time.

It was all built on the back of a great defensive line, good discipline and a willingness to make an impact at the breakdown. The only glaring issue was our inability to contest the Reds’ lineout ball. No injuries and plenty of gas left in the tank. The first ten minutes of the 2nd half started much like the first. We camped on the Reds’ line for almost 12 minutes until Pierce Reed dotted the ball down. The result of pressure and perseverance that has become a hallmark of the team’s play in 2014.

The 10-point try is something extremely rare in the game of rugby. So rare in fact that this pundit has seen it only once before during a high-school game in Fiji, or Samoa, or some island. After 20 minutes of tough rugby in the 2nd half, the Reds were able to finally touched down for a try and conversion to put them in contention. However, due to a Blacks infringement after the try had been scored, the Reds’ kicker found himself lining up another shot from the center of halfway. The result was a quick 10 point turnaround in the game which then became a 17 point bluster as the Reds crossed our line again a few seconds later. Stunning is the only word to describe the change in events. It seemed that in the blink of an eye we had gone from a 15 point lead to a 1 point deficit. To add injury to insult, Jerisevich was carted from the field in unspectacular fashion with another suspected rib injury.

The Foot finishes it

With time expiring, we weren’t sure on the sidelines that the boys could pick themselves up and go again. Shameful. The side has come a long way since their loss to NOLA at Burr in January. The team was saw on Saturday has a lot more ticker than anyone thought. They kept at it to the death and were rewarded with two quick penalties which Diego ‘the Foot’ Sotelo slotted to secure a tremendous victory. 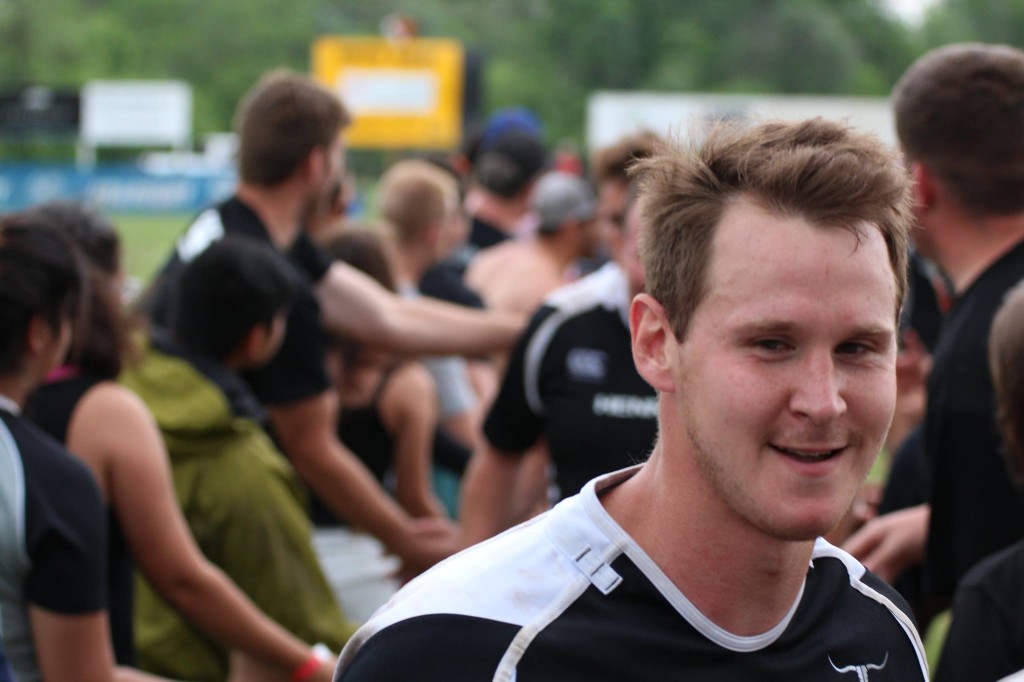 One quick shoutout needs to go to Kellen Burke and Austin Byrne here. Byrne has been in and out of the squad through work commitments but his first half was a pleasure to watch, hassling the opposition’s ruck ball and halfback gave us great momentum to build the first half lead. Burke was exceptional. Between bouts of puking his guts out on half way, he was a star around the field making some great hits and putting Dallas on the back foot. Great performances guys!