The Austin Rugby Club is taking to the field for the first weekend of play in the 2015-16 USA Rugby Gold Cup, a premiership level tournament featuring the top men’s’ clubs from the Midwest & Red River. The competition will bring the four teams together twice during the season, first up this weekend for the Blacks are the host Kansas City Blues, who narrowly lost to Austin the last time they faced in a 2013 playoff game. Sunday presents a new opponent in Metropolis Rugby Club, the two sides will meet for the first time in the two club’s history, which will certainly deliver the high level rugby the competition hopes to produce.

The Dallas Reds will join the Blacks as the runner-up from the Red River competition last season, suffering three losses to Austin, where the last of which came narrowly in the National Semi-Final. The Red River Conference has put two teams into the Final Four for the last two consecutive seasons that will prove beneficial for the Texas teams, having played competitively and finding some success on the road. Dallas and Austin will also play twice during the regular season where the points will count to the league table and the Gold Cup, giving those matches an added element that will demand the very best from the two rival clubs.

The Midwest Conference given the geographical union it plays in has already been playing their regular season matches, where Kansas City last year’s champion sits in third at 5-2, leaving Metropolis in the top spot at 9-1 after being second best in a very competitive matrix season in 2014-15. There is no question that these teams possess the talent and roster depth required to make a run for the inaugural Gold Cup Championship.

With the introduction of this new Gold Cup the club atmosphere around the Austin Blacks has been extremely competitive, we had the chance to ask the club Captain Timmy Howard how he has been preparing his team and to learn more about our skipper.

I’m from Gerringong. Don’t worry if you can’t pronounce it. It’s a tiny little dairy-farming town on the South Coast of NSW about 2 hours south of Sydney.

How long have you been playing rugby? How long in the states?

I’ve been playing rugby since I was 9. I’ve lived away from Australia since 2006. I played at the University of British Columbia in Vancouver and the Vancouver Rowing club before moving to San Francisco. I came to the Austin Rugby Club in the Winter of 2012 and this will be my 4th season with the club.

Through your time here in the states, how much has the landscape of USA Rugby changed? And how has that influenced the competitions here in Texas?

When I arrived, I was playing at a club with 17 foreign players. Most of them were transient and were only in town for the duration of the 6-month season. The Red River Rugby Competition requires that only 5 foreign players can play on each team each week. Having 17 players for just 10 positions is a completely unsustainable model for an amateur sporting organization.

The change since then has been dramatic. We only have a handful of foreign players, most of whom will be nationalized Green Card holders soon. We’ve also seen a huge influx of American-born players. Our coaches have recruited from colleges and these players now makeup the core of the club. Current or former Austin Blacks are now coaching about a dozen local high school and University programs. The club’s support for these programs is the major driver of new members and players.

With the introduction of the Gold Cup and its kickoff just days away, what is the environment like around the Austin Blacks? Any new faces for the fans to be watching for?

Playing two high-level games of rugby in a weekend is a physical challenge for all the players competing. The whole squad of 28 will be contributing. It’s a chance for us to blood a whole stack of new guys in different positions. Knute O’Donnell is one name to watch for. He’ll be slotting in at #9 in his first year out of college rugby. Mark LeGare who has come over from the Austin Huns is another who will starting in the 2nd Row. We’ve got a lot of new talent, but it’s still very early in the season so right now we’re looking to build some team chemistry for a long season ahead.

Both of your opponents for the Gold Cup are in the middle of their XV’s season, what kind of challenges do you see that presenting? And how have the coaches prepared the players in the build-up to this Friday night?

KC and Metropolis are both excellent programs. But being mid-season is both a blessing and a curse. We haven’t had our depth tested yet, while both their squads will likely have a few niggling injuries. They might have played more games this season, but our core guys were still playing and training together up until in June of this year so we’re not at a significant disadvantage.

In this first weekend of competition, win or lose, what is it you are looking for out of your players?

We want to see commitment to the game plan and everyone being on the same page. Mistakes will happen early in the season. The test for our guys will be to recover from errors quickly and put them behind us so we can focus on the next play. 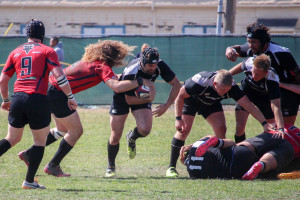 “The Reds are a tough outfit, if Metropolis and KC rest on them, the wakeup call will be swift.”

Your Red River counterparts the Dallas Reds have been there every step of the way challenging the top spot in Texas, how big are those match-ups now that the Gold Cup is involved?

The Gold Cup is an excellent opportunity for the teams in the middle of the country to showcase their skills against top competition. We’ve played some awesome games against the Reds and NOLA in the past 3 years. USA Rugby has assigned top-level referees for our 2016 season so the standard will continue to go up. The Reds are a tough outfit, if Metropolis and KC rest on them, the wakeup call will be swift.

In the grand scheme of things, what kind of opportunity comes with the new season and USAR Gold Cup for the Austin Blacks?

The Gold Cup represents a huge opportunity for our elite players to get in front of the eyes of national-panel selectors. We have several guys who are gunning for USA Eagles caps in the future and some of our newest recruits like Chris Bauman and Eric Reed have played for the USA repeatedly. This week also saw the announcement of a Pro Rugby competition in the US to begin in April of 2016. There are around 200 paid playing assignments on the line for the best American Rugby players. The Gold Cup is the first step for our guys to get themselves on the radar for these new professional sides.

Check out all the event pages hyperlinked to each photo *

Rugby is continuing to grow in the states and the introduction of this Championship Cup will only better the quality of rugby throughout the middle of the United States. Pro Rugby North America announced its USAR sanctioned professional competition, which will surely be on the minds of all the players as this fierce weekend of rugby starts in just two days. Stay tuned for details and updates as they come available by following the Austin Blacks Rugby Club!

Admission to the Rugby Gold Cup is $10.00 at the gate on Friday night, where fans will receive a ‘Weekend Pass’ that gains them re-entry for all matches – including on Sunday. On Sunday, single day tickets will be $5.00 for anyone who didn’t attend on Friday night. Children under 14 enter free all weekend long.

Brooksider Sports Bar & Grille is a presenting sponsor for the weekend is a recommended spot for the guys to head on Friday night following the games for more food, a few beers, etc. It’s close to Swope in a nice neighborhood. Also a great place to watch college FB games on Saturday. Address is 6330 Brookside Plaza, KCMO 64113.